More weathering on the new stuff

Just trying to get it right.

As mentioned in my last post I have been slowly weathering some new freight cars that I want to add to the roster of the yet to be named Missouri Pacific RR. I also lashed out and purchased several sets of FVM metal wheels (narrow tread 33 inch to suit M/T trucks) to add to these cars. I also purchased  several packs of the same including resistors so I can run these on Johns new SFRMD RR for detection purposes and if I ever get back to signals on the new RR.
I want these wheels to look the part so before I add them I'm painting the wheel end a rust colour using Tamiya Red Brown with a very small brush.
The trucks are receiving a coat of Tamiya Nato Black followed by a light dusting of Pan Pastel rust looking pastels.

This is where my good lady is allowing me to do the work on our kitchen table. There is a wide variety of paints used in my weathering, oils, acrylic and Tamiya along with pastels that do a great job also. Oh and don't forget the Dullcote it does a great job of binding all these finishes. 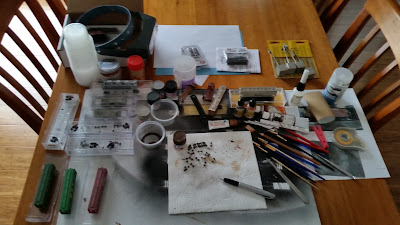 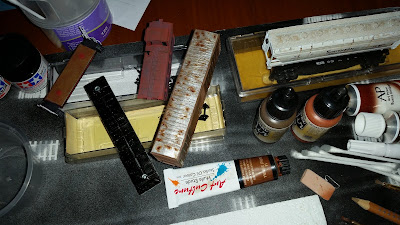 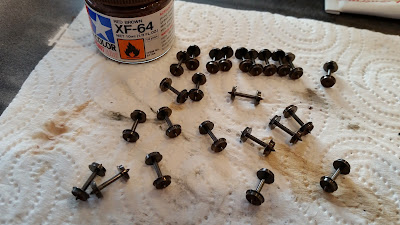 Ready to be added to the trucks today.

That's it for today keep on modeling.
Rod.
Posted by Rod Warren at 19:32 No comments:

A bit of variety today.

Friday group at the SFRMD.

A group of us get together each Friday in a round robin that has now been going for 7 years. Yesterday it was time to attend Johns house and see the progress on the SFRMD.
John was worked very hard and to our surprise we were able to run trains on the Santa Fe main for the first time. Trains had been staged in various towns some with old locos and some with new additions to the roster. Two additions caught our eyes, one a new Intermountain SD40-2 with full ESU Loksound the other a small switcher S2 if I recall with sound also.
Boy have Intermountain upped their game. The new SD40 looks fantastic and performed as good as it looked with even better sound than any of us had heard before from our N Scale fleet with various decoders we have used in the past. The Alco switcher, well it knocked the sound out of the park. It too sounded exceptionally good and ran even better.
No video but a couple of pics to show the new additions.

A couple of random shots from the day.


The next part of this post.
A New RR with no name as yet.
I have decided to build a small shelf layout once we settle down into our new home hopefully about August with any luck. This will be based on a new to me railroad the Missouri Pacific. This is so I can also run a few trains on Johns RR on his Mopac RR as interchange traffic. As a result I have started to purchase some new rolling stock and commenced weathering some to get them to look as they should.

Here is a couple of pics of the start.

Then I touched up sections of the top with some Burnt Sienna followed by a dab of Burnt Umber into the middle of these spots to make the rust look a little more defined and aged. 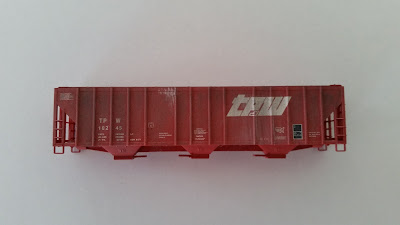 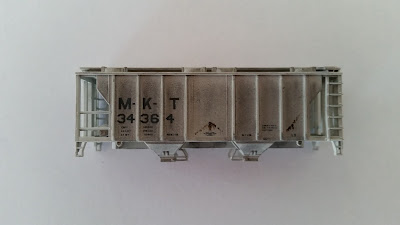 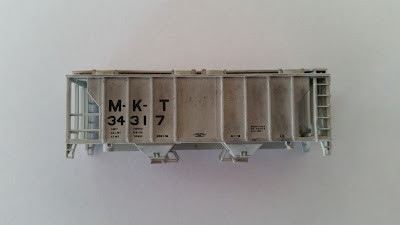 So we are underway. I have just received just over 100 FVM 33inch metal wheels and a few sets with resistors already installed. These will be added to the cars as they get their weathering.  New trucks will be added where necessary a paint of the couplers and they should be good to go.
Thanks for taking the time to stop by.
Rod.

The main line is completed

It is hard to recall that in March of 2016 work began in the upstairs section of Johns home to prepare it for the old SFRSD. If you scan back to the March 2016 post you will see John Fahey, myself and the new owner John starting to pull down walls to allow the layout to fit.
Well last week the main line for the Santa Fe was completed. Tracks were installed between the old town of Udall and the existing piece of old mainline that used to connect Perry to Guthrie and at the other end new track to the old town of Augusta. Wiring was completed between the old Augusta and Augusta East by John F yesterday whilst at the same time work was put into the planning for a few new blocks and signals by John and Brendan.
So here are a few pics of the track-work and wiring that has brought the RR to the point it is today.


A bit more wiring around the rear of the new roundhouse and the mainline will be completed.

For those unsure of the track plan for the Santa Fe Railway Middle Division here it is as of now.
Little has changed from this plan except Augusta East has been rotated 180 degrees with some tracks realigned. 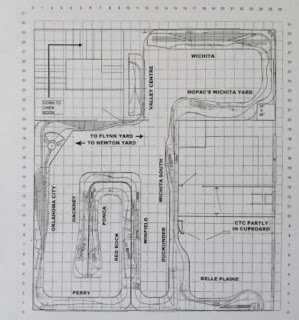 One of the big bonuses is just how good the old Guthrie now Belle Plaine looks. It is if it was made to be.
Well thats it for another update.
Thanks again for dropping by.
Rod.
Posted by Rod Warren at 20:42 2 comments: