The house is sold

The SFRSD home has been sold.
After almost 37 years the house that houses the SFRSD has been sold. Our house went to auction last Saturday after several hectic weeks of open house and house building inspections by prospective bidders.
That done and dusted I can now relax and start adding to the SFRSD blog that has been neglected for quite a while.
The good news is that my very good friend John has purchased the SFRSD in its entirety. The layout, rolling stock, buildings and all road vehicles. So a big thanks to John for that as that was a total surprise.
Knowing this, back in late March I invited the regular crew to come for the last operating session and to bring some of their own road Locos and rolling stock for one last hurrah. It was a very casual night, Greg was dobbed in to be the dispatcher and nobody took any notice of him that much such was the mood of the night.
It was also good to see so many good looking locos strutting their stuff on the rails as the night wore on.
Here's a few shots from the nights action. 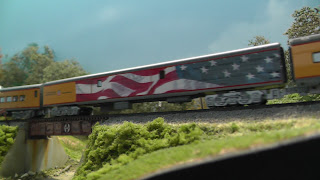 Thanks for coming over guys. Many fond memories of nights past on the SFRSD and it will be good to see the Railroad in operation again in its new location.
Update.
Work on the room where the SFRSD will be moved to has commenced. So stay around as we dismantle walls, attack the wiring and section the SFRSD getting it ready for the big move.
Thanks for looking.
Rod.