Finished two Trestles over the past few weeks

Need to catch up a bit on stuff I have been working on in the study as it has been freezing outside here in Bayswater. Yesterday it was -2 degrees at 6.15am.
I am very happy with the progress of these two trestles. Lots of work assembling all the cross-ties as shown in a previous post then over 100 NBW's added to the longest bridge.
For all the main timbers instead of soaking them in the alcohol/india ink solution I have stained them using a bottle of Walnut stain I picked up years ago from a scrap book store along with a Walnut Copic Brand marker pen. I used this colour as the bridges I have seen in pics of the D&RGW are coated in creosote. The Walnut gives a nice brownish look almost like creosote.
Here are some pics of the two in progress and then in situ waiting for scenery before being set in place.

More work is underway on a small trestle and a water tank but that will come a bit later.
Thanks all for stopping by.
Rod.
Posted by Rod Warren at 17:43 No comments:

This is some model RR

Finally had a few moments to go back and do a bit of editing of video I took on Bills SN3 layout back in May 2015. There is a lot more to see than what is on this however time has got in the way and I need to get back and re-shoot the new sections.
Anyway here is the 2015 version of Bills Animos Lobato & Southern RR in Sn3.


Thanks for coming by.
Rod.
Posted by Rod Warren at 05:49 No comments:

Time to build my first trestle for the new RR

Now that the major construction has completed (images to follow on a later post) and I have started to lay 3 mm cork for my roadbed it was time to start construction of my longest trestle.
This trestle will be 130 scale feet in length however it will only be about 10 feet above the river (shallows) that will flow beneath.
It will be located between duck-under number 2 near the stairs and the town of Ponca Junction. The plan is to have a series of low rapids with a few shallow water falls as I have seen in a pic of the D&RGW which the bridge will traverse.
I began construction by cutting a bunch of Fast Track turnout ties to a scale 9 feet. These had previously been stained using the alcohol and India ink stain mixed together with some sepia for some variation. I made a jig to keep all of the ties in line after seeing the idea on therailwire. To do this I used some 1000gsm presentation board with two strips of styrene glued to it with the correct spacing.
You can see a portion of the jig below. 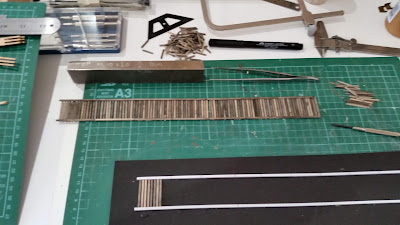 Having this jig has saved many hours as it allowed me to just keep adding ties whilst making sure they were at right angles. Once several scale feet had been set in place I added scale 14 feet timbers to each side and held these in place using Aleene's tacky glue. This stuff is amazing as it holds as soon as contact is made whilst allowing time to set them in place.
So after a few days of adding ties and side timbers it was time to add the supports below. For these I used Walnut stained 12" x 12" timbers and glued 2 pieces side by side to strengthen the trestle. Next when they arrive will be two 12" x 18" timbers down the outside on each side. 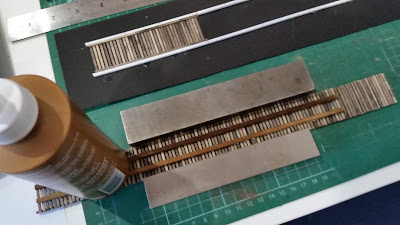 Once these beams had set I touched up any spots that had not seen any stain and then today set about adding nut, bolt washers to the side beams.
I was pleasantly surprised just how fast I got this job completed. I drilled down one side with my pin vice all 52 holes then decided to give my new Dremel a whirl to do the other side. By 3pm after not starting until 11.30 am all 103 nut bolt washers were installed after first receiving a coat of Tucson Oxide Red to make them look a little rusty.
So here is the deck almost complete just waiting for more timbers, rail and check rail to be added. 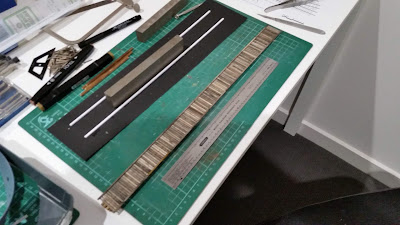 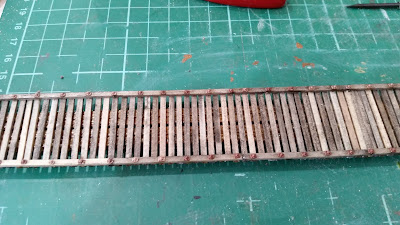 The look is much better in person as the ties are a lot darker which is more to my liking. As I glance at more and more images of the D&RGW I notice that most of the timbers look like they are treated in creosote. I am trying to emulate that look with my Distressed Walnut Stain and I think it is working somewhat.
Rod.
Posted by Rod Warren at 02:27 2 comments: