A few more images from The Saturday Run

Just a couple more Images from Saturday
I thought as long as the guys brought along their locos and stuff I should add a few more images today. 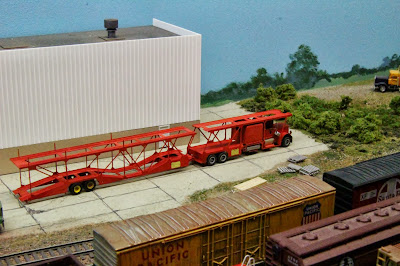 That's it for today so thanks again for stopping by and have fun running a train.
Rod.
Posted by Rod Warren at 22:16 No comments:


The 19th Anniversary of the SFRSD
Wow, has time certainly flown by since I dismantled my last layout and commenced the SFRSD. in the smaller shed than it is in now.
To celebrate the occasion I decided to have the crew and a few other friends over for an operating session, dinner (well pizza and chocolate coated ice creams can be dinner) then let the guys run their own road loco's and rolling stock on a Saturday just for something a bit different. One could not make the day, and two guys called in sick it so we hope they are on the mend.
We kicked of at about 3.00pm with a cuppa and a lot of chit chat which is always good and then got down to some serious operations. We ran the normal timetable that I use on a Friday night session and that ended at about 6.15pm short of a couple of trains running otherwise we would not finish till midnight if we didn't stop for beans somewhere.
I kicked off being the dispatcher for the first few trains then handed the panel over to Darren. He's a signalling guru on the big stuff here in Victoria so he was in his element.
John C operated Augusta with Vic, Noel and Rob took charge of Flynn and the rest of the guys either took a train or waited until their train was called.
I became chief cook and bottle washer, well wash the mugs, top up the urn, bring out more food and along with my good wife kept up the supply of goodies.
I did get a chance to take a few images of the sessions. Unfortunately with my layout lighting as it is it is difficult to get a really sharp image without room lighting so here goes with what I got anyway.


I am fortunate enough to know many fine modelers with great layouts that were happy to bring some of their favorite locos and rolling stock for a run on the SFRSD.  After a few of the crew had headed home after dinner to attend to home duties etc the rest of us stopped at about 10.30pm for another cuppa, supper and a chat to reflect on another great day.
With plenty of food, lots of tea and coffee and a lot of trains run a good day and night was had by all
Thanks for sharing guys.
Rod.
Posted by Rod Warren at 21:25 No comments:

The GM plant at Flynn

Renamed plant at Flynn
I made the plant at Flynn quite a few years back long before the extension of the RR room using 12 mm thick MDF as a box on which to laminate the Evergreen Board and Batten siding. There are three boxes per-say with another for the roof portion that has the stacks fitted. All building have various coatings along their base to have each one slightly different to the next. I wanted it to be the GM plant that the SF served at Flynn however in the days I made the building I could not find a GM logo and as I had an abundance of Atlas LNT 9000 cab chassis to sit out front I just called it a Ford factory. That bugged me for years so mid way through this year I finally found a decent GM sign levered the Ford sign off and replaced it with the new GM logo.
Needless to say the LNT9000's had to go so they are now scattered around the RR serving their keep hauling SF trailers to some worthy customer.
This group of buildings measures approximately 42 inches overall and fit in well along the backdrop at Flynn. I put some of the Walther's roof top details on the roof along with other roof details from Greenmax (Japanese Kits).
I choose not to run any auto racks as to me they being 89 feet long tend to make my layout mainline look shorter than it is so the plant only receives box car loads from Winfield and Ponca. 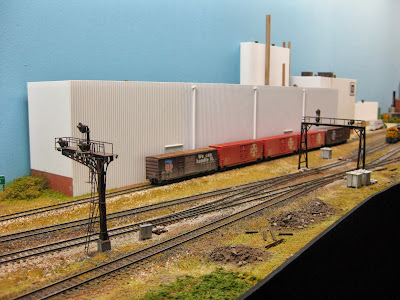 This was a very quick and inexpensive building to build and makes a nice difference to having kits that are well recognized.
I have a few more building built in a similar fashion that I will add to my pages.
Thanks
Rod.

Weathering Hoppers
I have been a fan of weathering my Locomotives and rolling stock for some time however after viewing several new web pages I decided I wanted to try my hand at using oil paints.
Two new hoppers were purchased at the last train show here in Melbourne as my first attempt at this medium.
Based on these new weathering to me web sites four primary colours are used to get the overall effect of aging and rusting on roofs and along the sides of cars.
Vandyke Brown,  Raw Sienna,  Burnt Sienna,  Burnt Umber all oil paint.
To thin these I used odourless solvent (thinners) this made it acceptable to do most of the work in the study.
The first step was to give the cars a spray of Dull Coat. This acts like a key for the next phase to have some key (grip).
I also masked off the car number so my operating crew could read them during an ops session. So a quick very light wash of Vandyke Brown followed by another spray of Dull Coat, another wash another spray and so on. I painted the wheels with Tamiya Red /Brown and gave the couplers a coat of paint to get away from their shinny black finish.
This is the process as I went through the steps. 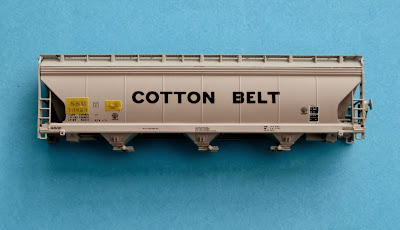 Depending on the available light the cars look lighter in person. So two cars were completed with pleasing results well to me anyway.
I was happy with my results and will definitely weather more of my cars using this method.
So not much else happening on the SFRSD the past month so thanks again for stopping by.
Rod.