Building Construction equipment has been ongoing

It's been very cold here in Melbourne the past weeks so I have commandeered one half of our kitchen table to sit at whilst building these GHQ models. My wife is quite ok with it so that make a huge difference.
The GHQ bulldozer is now complete as too the Freightliner cab over tractor unit. I also withdrew an older build of a bulldozer and gave it a hit with weathering wash. The Freightliner went through several stages however I am still a little disappointed that I did not completely remove the flash line across the side of the cab so the 3 foot rule will have to come into play with this one.
I gave both (in fact all of these units will receive it ) a spray of Tamiya grey surface primer before they received a coat of Tamiya Bright Orange. Once dry I used the Tamiya panel line black wash to go around the doors on the cab over and around the engine of the bulldozer. A wash then followed of panel line brown that then settled the look down very nicely. Oh a coat of dull coat was applied between each process. The cab over then got the interior painted and the wipers, roof lights, grill and bumpers all scraped of paint to reveal the silver of the pewter. The horns were attached. I also added some Micro krystal clear to form the windows. A touch of panel line black for the grill and some Pan Pastel over the flat black on the tyres and the job was done.
The bulldozer got almost as much work of weathering with a bit of extra work on the tracks.
Vic gave me the flat bed trailer and several pieces of crane jig and as these are going to be a part of the construction company they have received pretty much the same treatment.

And this is how they look thus far. 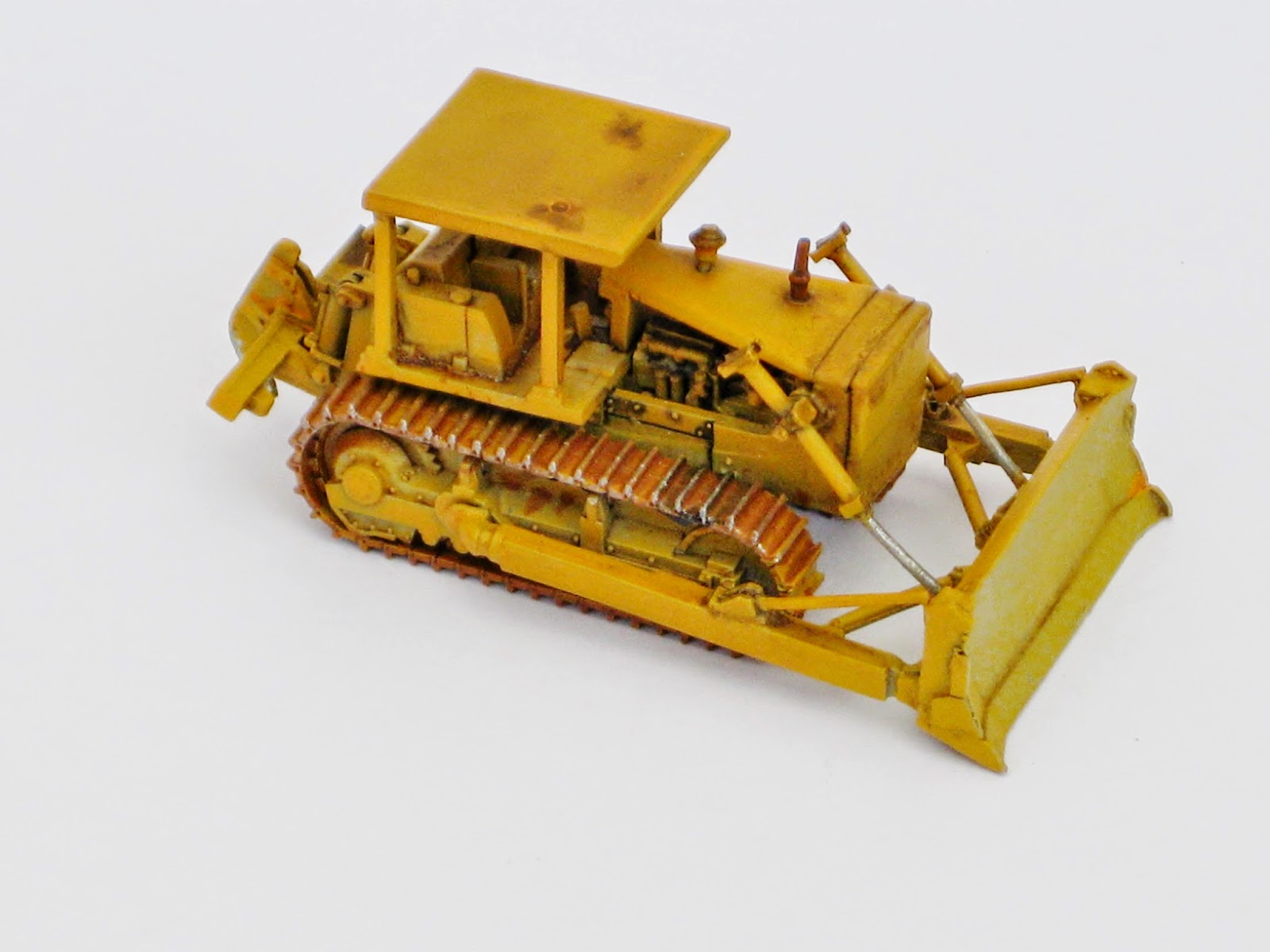 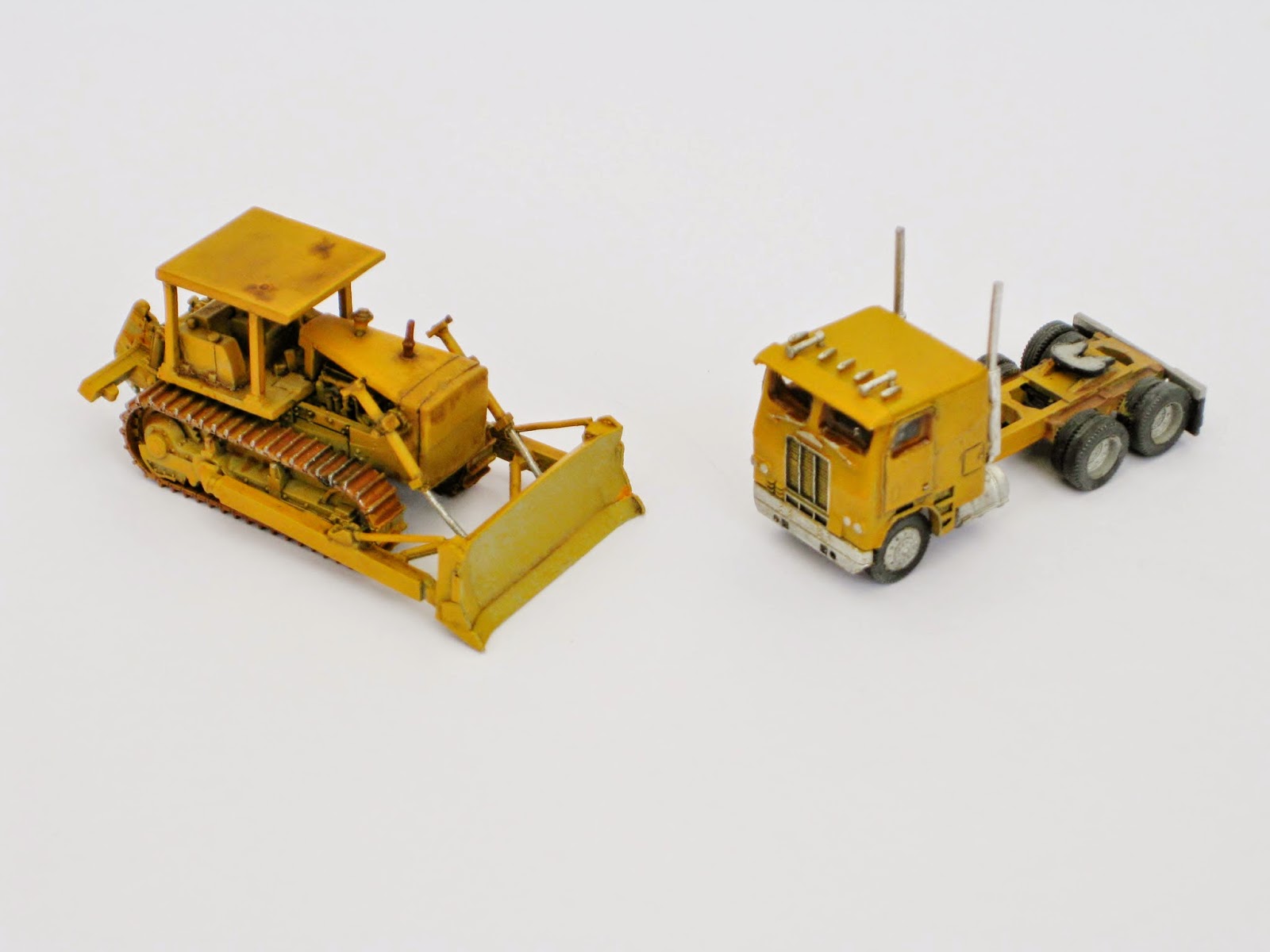 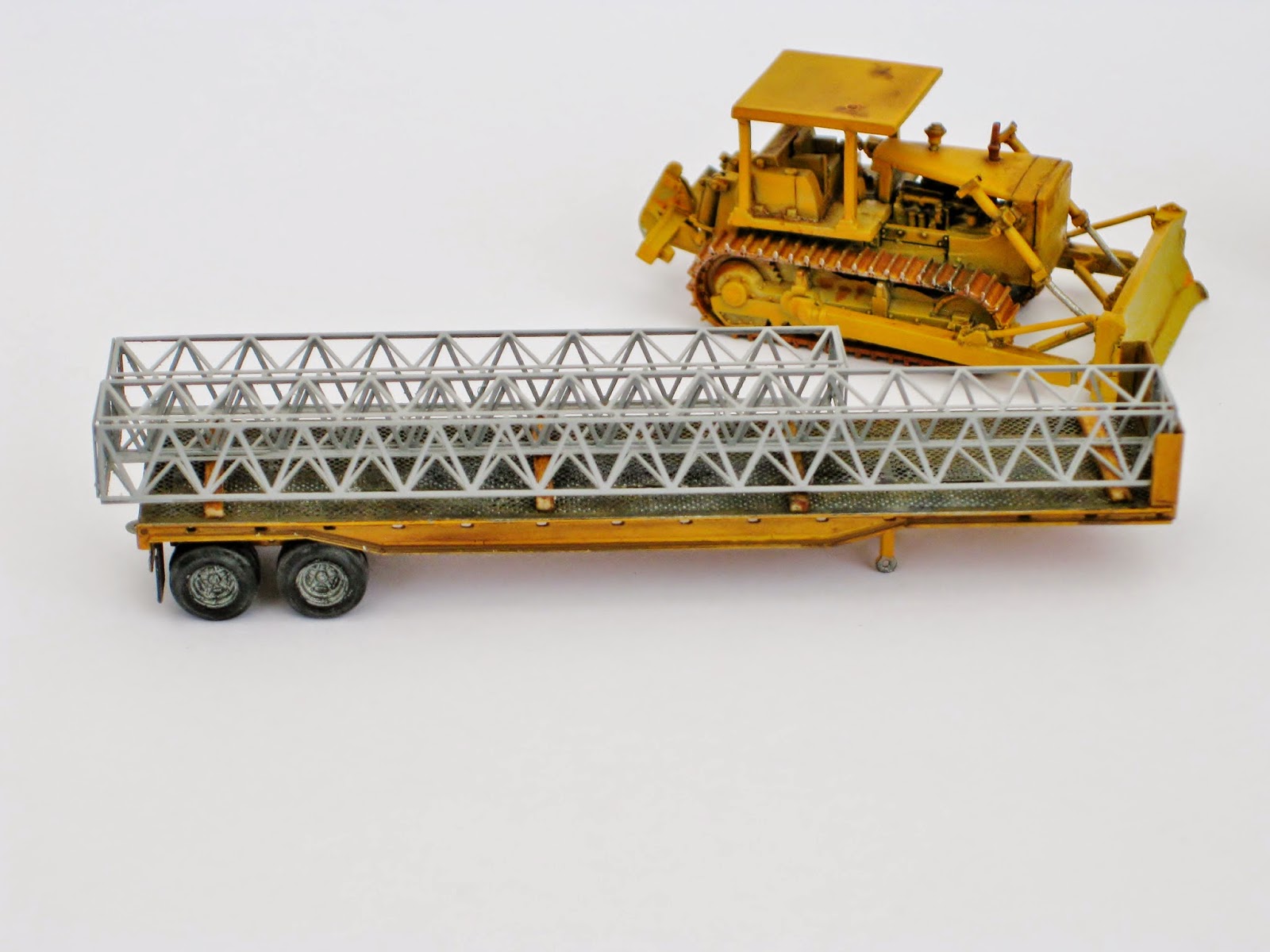 More construction vehicles are planned with several forklift trucks already under construction so hopefully they will turn out ok.
Thanks for dropping by.
Rod.

It was Barrys turn this Tuesday.

Tuesday night saw a group of old Melb N Trak club members (well not that old ) head off for a night of running some trains and taking a look at all of the updates that Barry has made to the old Thompson River Canyon Layout. Barry purchased the layout from Vic and myself some years back after Vic and I decided to call it quits on displaying the layout at exhibitions. Whilst we had a lot of great help from many of our mates it was getting harder to arrange the movement and set up.
Barry has been a member of Melb N Trak for some time and once he heard TRC was up for sale I sort of suspect he could not hold back. Barry was still moving into his new home so it was a while before he could get it into his allocated area into a single car garage that is under the house roof line.
It wasn't long before plans were drawn up to allow for as much of the display RR to be used. Barry has done a great job of implementing his new track plan and at the same time keeping some of the much loved portions of the former TRC.

The Edson Sub as the RR is now known is looking fantastic. Barry is about to start making car cards and adding way bills similar to those we use on the rest of the groups RR's. This should make for a lot of fun as we start to operate the re-born TRC in its new home. That is something to look forward to.
Thanks for dropping by.
Rod.
Posted by Rod Warren at 19:52 2 comments:

Something a bit different

Operating night on the Boise City Sub
Last night was the first operating session we have had for a while on our good friend Johns AT&SF Boise City Sub for almost 6 months.
John had decided some time back to add dispatching to his excellent Santa Fe Boise City Sub N Scale RR. We operate on it several times a year and John like me had issues of some operators moving trains from towns to the next without checking if they had a clear run to do so. John had already fitted some of our mate Vics excellent SF style signals that worked off his turnout switch   these looked good but did not allow for the holding of trains, so having a dispatcher was the next move.
John started his RR going straight to DCC back in the late 1990's so one big job was to determine where all of his blocks needed to be, others were to remove all of his facias, assemble and install heaps of signals and work out all of the logic to develop the JMRI track panel to suit his RR.
Help along the way from our resident JMRI expert Brendan and some help with installation by a couple of the operators of some signal PCB boards and in what seemed like no time Johns system was up and running again. A shake down test was held in the month of May which found a few bugs but proved the system was working however the true test was to be the operating session planned for and held last night.
One other test that was taking place was the use of small two way radios for the crew and dispatcher to use to communicate.
Of the eleven or twelve guys that usually turn up for one of our sessions unfortunately due to unforeseen circumstances only five could make it to Johns to participate in this special night.
Well by the time I arrived Greg and John had the radios out of their packets Batteries in and testing. Greg, John, Brendan and I purchased 4 sets each so we could share them around each others RR when holding ops sessions. I quickly plugged my head set in attached it to my ear and straight away could hear the guys talking very well.
John had set up his dispatchers desk beneath his layout nicely tucked in out of the way but easily accessible so once the rest of the nights crew arrived hooked up their head sets we were off and running.
John has done a great job as the night went off without a hitch. The engineers now know to contact the dispatcher with their train number and location and are now given instructions via radio instead of the old shout & holler system that was starting to get out of hand especially when we have the full crew available. The signals, dispatcher and radios all worked very well and all of the guys agreed that the night was a hit so well done Big John.
Here are a few images of the night.


Me, I ran the Amarillo local to Dumas and back, took the photos and had a great time.
A great and successful night once again on the AT&SF Boise City Sub.
Thanks John.
Rod.
Posted by Rod Warren at 19:08 1 comment: