The next step.
I spent about one hour in total masking up one of the C628 Loco's last night and early this morning so I could use the good weather today to spray all of the grills. What a job, boy these units have just so many grills on either side and on the roof I am pleased I have only done one thus far.
I realize that the front and rear most grills on each side will have some decal strips across them however they can be weathered up afterwards.
Yesterday I mentioned I was going to use flat black with a dash of rust. I changed my mind and only sprayed them the flat black as I now want to wait until the decaling is complete before I do the other 3 locos and then I can weather them completely.

Here is a rather poor shot of the C628 with the grills painted and after it had been given a very light coat of Testors Gloss Coat. 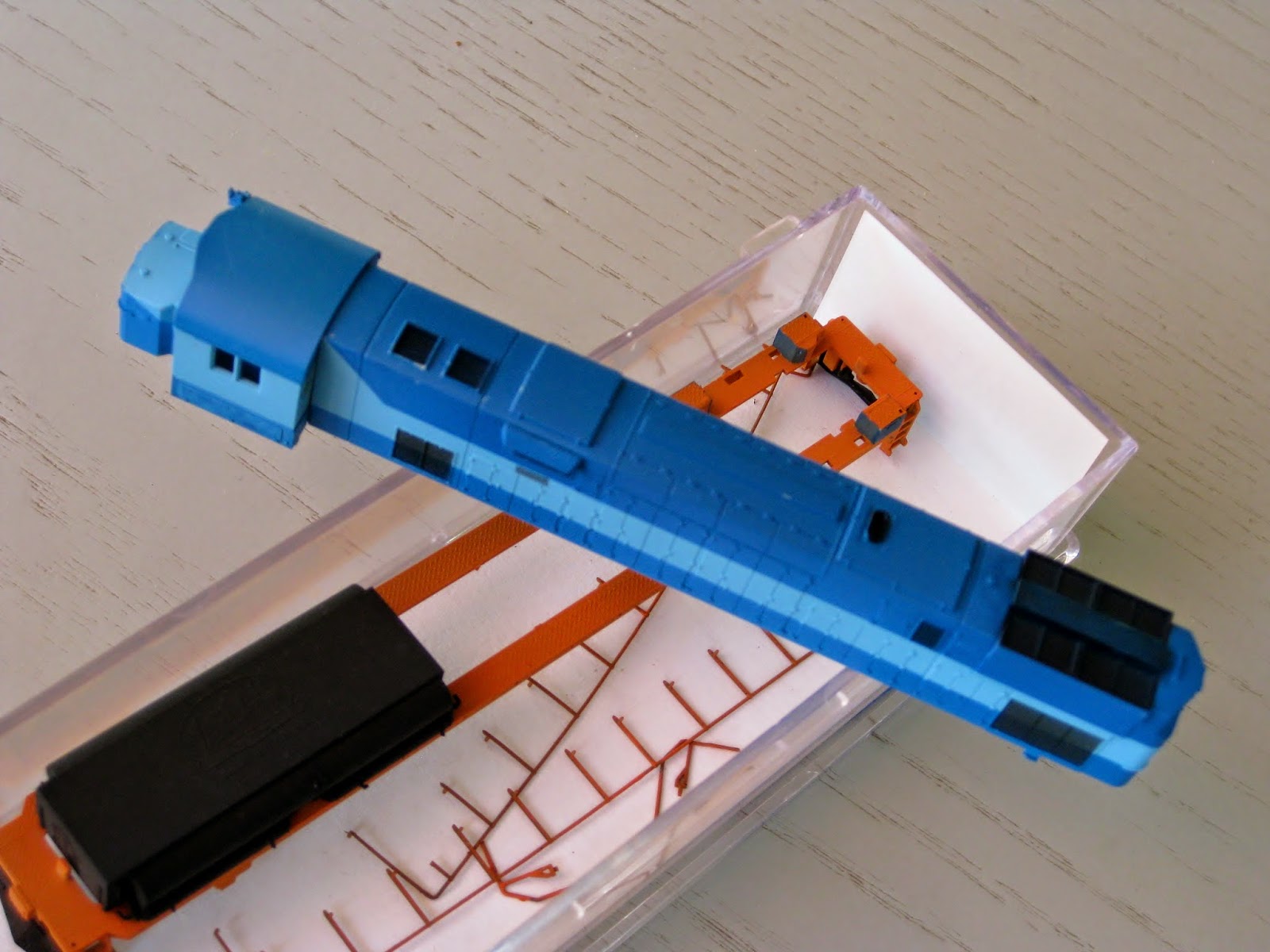 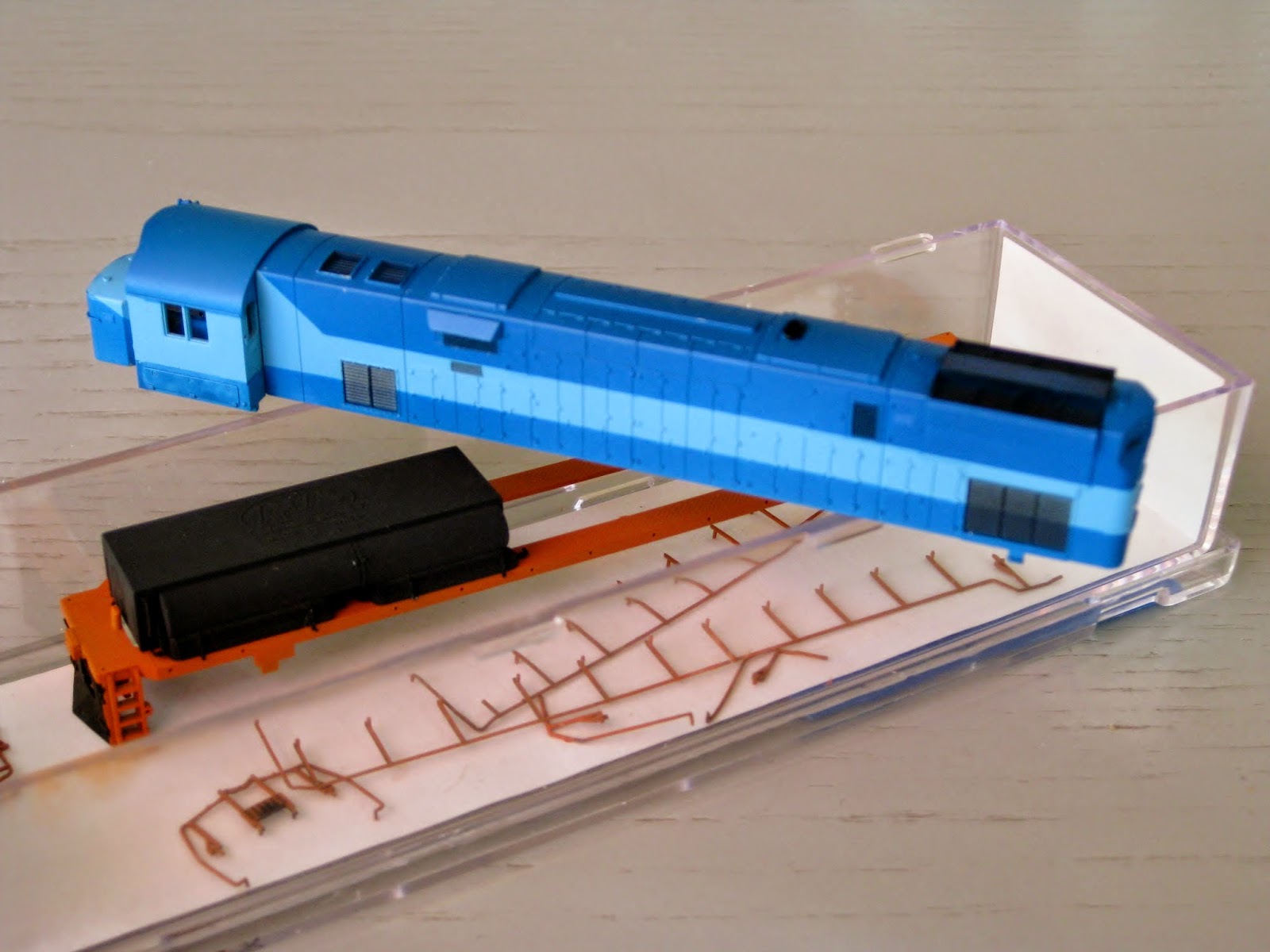 Once the decaling is done and I can get to do some weathering on these I think they should pass.
The four fuel tanks also got a spray of Flat Black today so now it is up to Graham to get decalling.

Cheers for now and thanks for dropping by.
Rod.

Custom Painting for a Friend

One of my friends is modeling the KCS in Mexico in N Scale and has an array of good looking locomotives and rolling stock on his roster. He has had four ALCO loco's 2 x C630's, 1 x C424 and one other I am not familiar with all undecorated sitting aside waiting to get them painted in the F.N.M. paint scheme. As I had not much to do I offered to have a go at painting them for him however he has to apply the decals all those thin red lines wow.
We got together last Friday at one of our regular round robin model railway get togethers where he passed over the 4 stripped down body shells, 4 sets of walkways and several very small packets of hand rails.
Obtaining paint to match the F.N.M. here in Oz is tough so Graham purchased a Tamiya light blue for the center stripe and a darker Tamiya blue for the rest of the body. The orange for the handrails was a tough stretch however I had a small can of Humbrol mat orange that looked like it might be close to what he wanted.
The weather is turning cold here in Melbourne however we are having a warmer than normal week so it is a good time to get in and paint these before it gets cold again.
The first job was to mount the body shells on discarded toilet roll centre tubes as these make very handy stands to hold shells whilst painting.  I mounted the cabs on the little holders that you will see in the images below. Similar to these were found by another friend in a $2.00 shop however I purchased mine off E Bay and very cheaply at that.
I then mixed the lighter of the blues with mat white to get it closer to the color we wanted and gave the shells a couple of light coats.
The shells were left to dry overnight so the next job was to spray the handrails in the orange, again the stands with the clips were invaluable at holding these not only whilst spraying but whilst drying also.
The shells were then masked to get the light blue stripe. These needed to be 5mm, no, Tamiya does not make 5mm masking tape so I cut 10mm strips into two using a medical scalpel and worked at getting them nice and straight. Using my dividers helped at making sure I stayed true to the position all way around the loco.

So here is how the shells looked after the first coat and masking for the dark blue sitting on the toilet roll tubes. 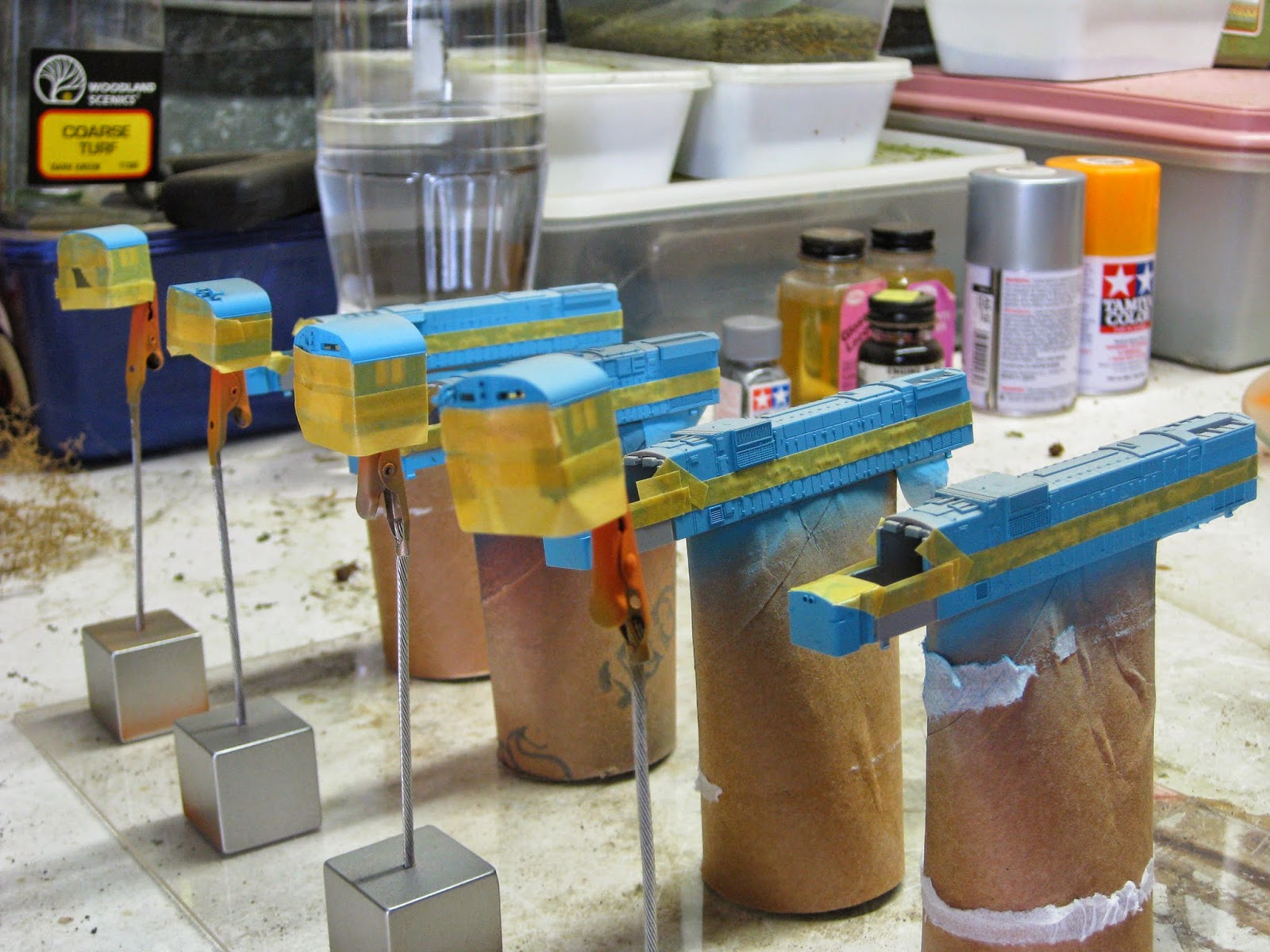 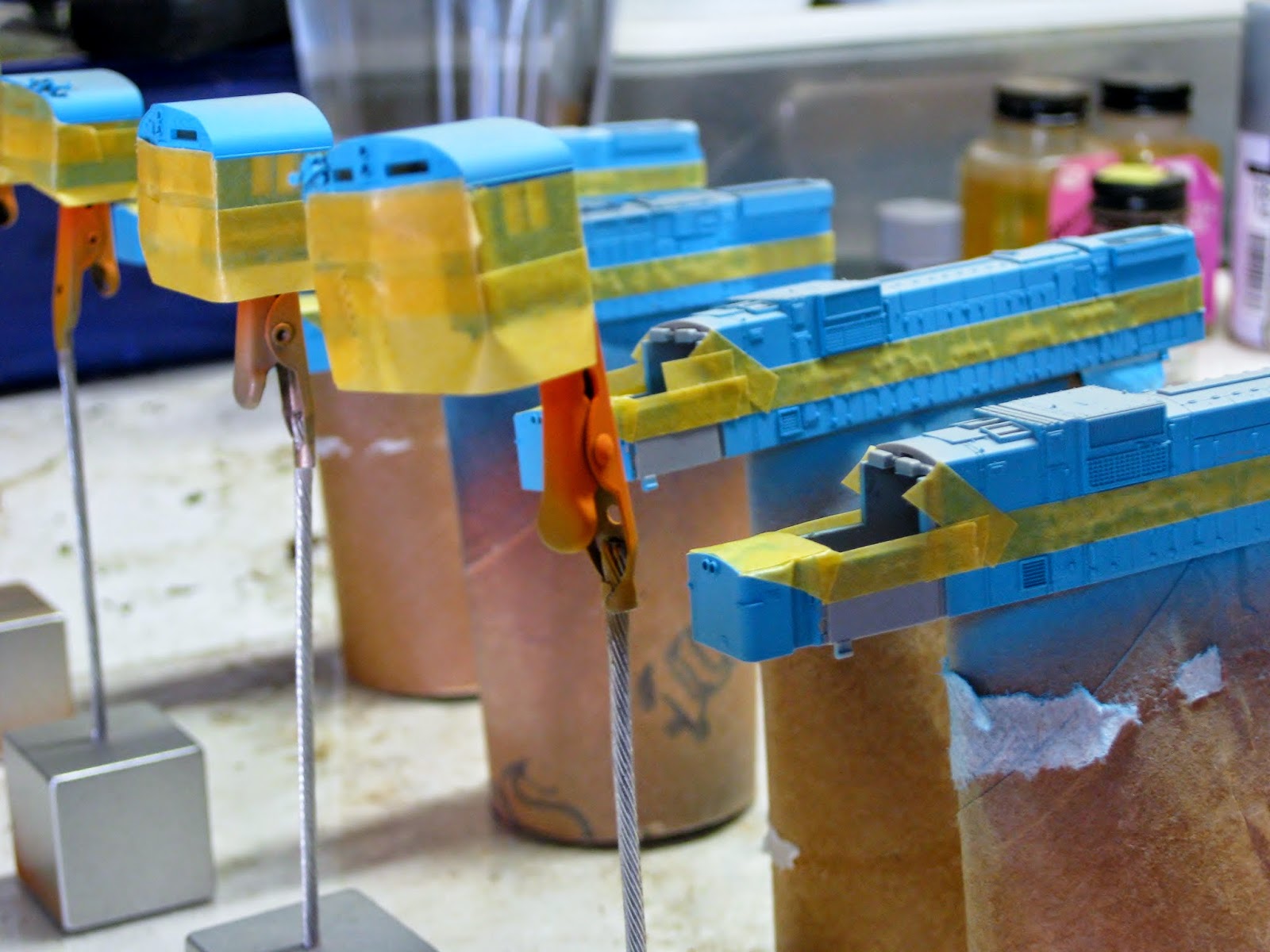 I had to learn the hard way and that is before you put on the next coat of paint if it is a different colour is to give the shells another coat of the first colour over the edges of the masking tape. This helps to stop the second coat bleeding under the masking tape and gives a much sharper line so this I did.
The second darker blue was also mixed with some flat white to get it a little closer to what we wanted and then applied.

And this is how all four shells have turned out thus far. 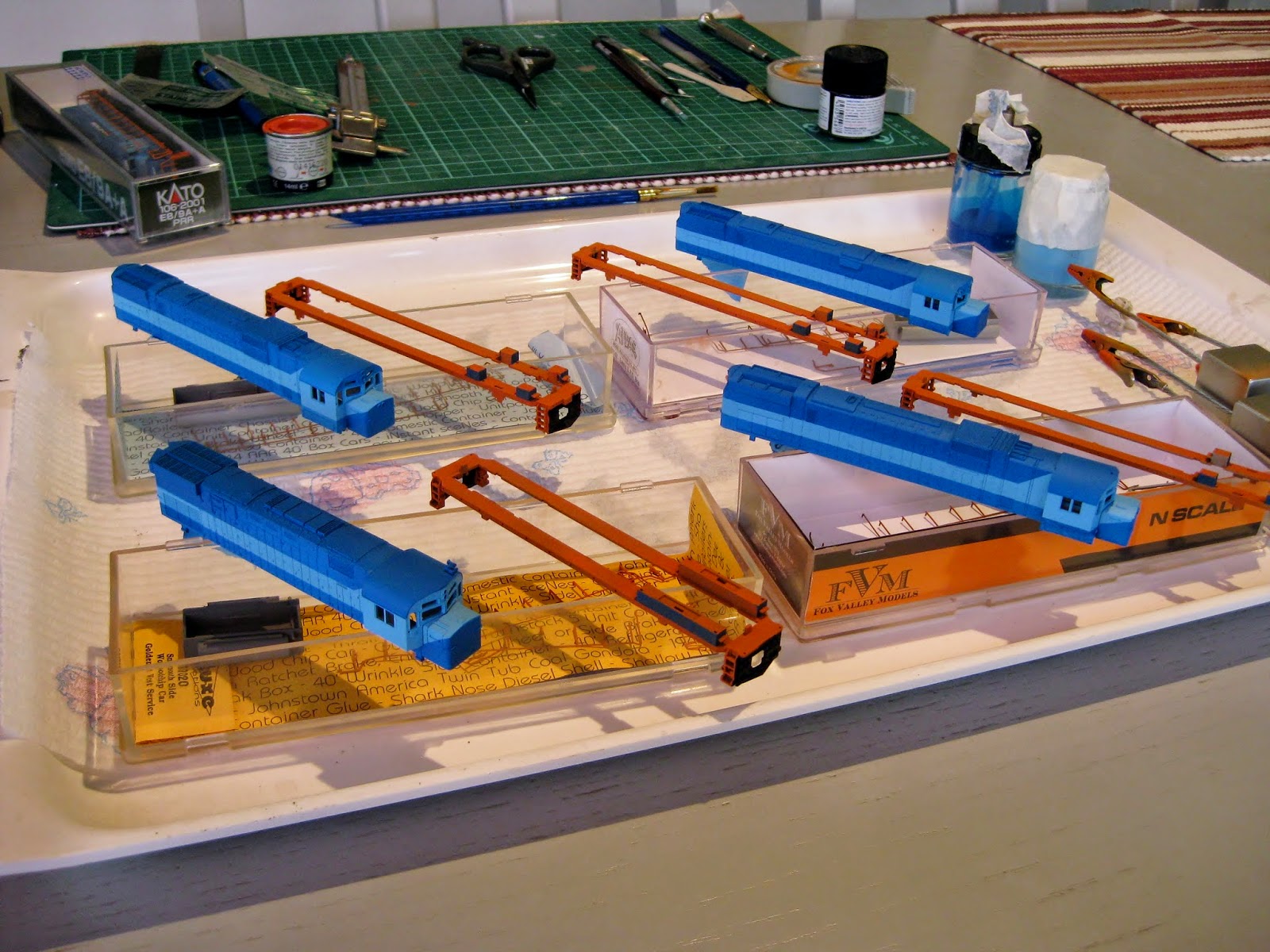 I have hand painted the battery boxes and the front and rear pilots on the walkways for to mask these would have been to fiddly and taken just too long.
The next step it to mask the shells again so I can spray all of the grills with a flat black with a bit of rust colour added so these babies look like they have been working. The weathering will be completed once Graham has added the decals. A bit more work to go before they are finished however I can hardly wait to see these ALCO Locomotives running on his RR earning their keep.

So until the next post thanks for stopping by.
Rod.