Another Friday night on the SFRSD
Last nights ops session was a bit different than usual as I only had 6 guys plus myself to operate the RR..
Several of my regular operators are on holiday. Vic is in Weipa which is almost as far North as one can get in Australia. Weipa is a Bauxite mining town. Little John is at the Gold Coast visiting family, Greg is on a cruise with his wife heading up the East Coast of Australia. Darren was working and Brendan was stuck at home.
Roger a member of our Melbourne 2003 convention committee asked if he could participate in a session so he could see how it works. Roger is a Victorian N Scale Modeller and a member of the Victorian N Scale collective so he added to the numbers.
We started at about the same time as usual 7.30pm only this time Ron was in charge of Augusta while Noel took charge of Flynn.
I usually stage the first two trains to depart the day before. The loaded Grain that departs from Augusta at 7.10 am and the empty grain that departs Flynn at 7.30am by the fast clock that is set to run at 4:1.
Dennis and Roger took control of the Aug / Fln loaded grain whilst Big John was in charge of the Fln / Aug empty grain. These two trains meet at Red Rock.


The Winfield to Guthrie and return Cement train can take almost all night. It has no rights and must fit in to whatever is happening around it. 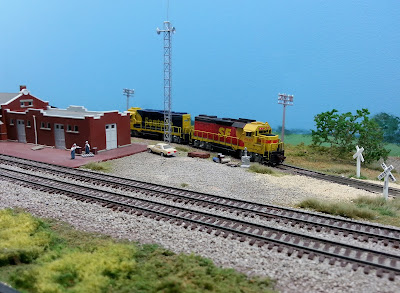 So with only 7 of us to work the session, me as dispatcher, time out for beans at 9.00pm we called it a night at 10.30pm.
A big learning curve for Roger as he plans the operating system for his new RR and a good night was had by all.

The Journey Continues
Once we decided to build the TRC we wanted to push the envelope to show N Scale to its best especially since it was to primarily be an exhibition layout.
The track plan was worked out over the kitchen table so we could have some industries at which to switch (to show the public how operations work) along with those fantastic snow / rock slides along the canyon which are a feature of the area.
We also decided that the RR would use Digitrax DCC, use Micro Trains code 55 track along with some hand made turnouts and an important feature in our minds was to incorporate a signalling system. We wanted the layout (track) to be much higher off the ground (56 inches ) so you looked into the trains and a deep fascia to help frame the scene and allow room to hold our Digtrax Up5's and turnout control panels. It also provided room under the track to hold all of our trains, signalling system and the Digitrax command station and power packs.
Vic is a master at producing custom made, brass etched signals as seen on my RR.
The track plan is simple. Single track with a passing siding on both sides (to allow bi-directional running) with a couple of industry tracks and a house track on the front module. We added four storage tracks behind the front backdrop to allow us to make up trains which also allowed us to change the trains more often to keep the public interested. 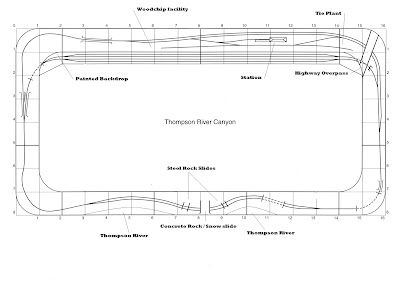 The number of modules was also important so we could fit them into our existing vehicles. I chose to build the rear half of the layout so that comprised the two corners and the three four foot modules. Vic had a ute so he took to build the front sections which comprised two six foot straight modules and the two larger corners. In fact all of the layout was built in my workshop given that I had all the machinery necessary to build what was needed. The layout is 16ft long and 8 ft wide so plenty big enough. The front modules are 18 inches deep with the rear only 12 inches.
We purchased several sheets of 7ply and had it ripped to 3 inch wide strips with which to make all of the frames. We wanted to use this as we thought it would be more stable than plain pine.
It took quite a few months to get to the stage you saw on the first post but there was still a long way to go.
The signalling system was one of the biggest hurdles. We had seen a system when in San Diego at an N Scale convention and the following NMRA train show called Signalling Solutions. This system was quite new however it looked like it might just do the trick for the TRC. Vic and John made contact with the owner, sent him our track plan and following many emails later agreement was made as to what was needed to run the layout as prototypical as we could. Noel, one of our longstanding friends having an excellent knowledge of wiring and an N Scale modeler to boot was gently persuaded to do the wiring of the signalling system. I'm not sure Noel nor any of us realized just how difficult this was  going to be. So after many wiring diagrams later, (some 3 feet long) we were able to get the wiring in, mount the main boards and all of the signal drivers. Then lots of tweeking to get it to work.


One of our other goals was to get the layout up and running for the 2003 Melbourne N scale Convention. Boy this sure put the pressure on however we got there even though we had not made any light fixtures.

We survived the convention and then set about building our light boxes. These followed the contour of the modules and were made the same size to fit over each module. We chose to use 25 watt small frosted globes spaced 18 inches apart, these worked very well. To connect the light boxes we used old computer power cable male and female sockets along the top of the light fittings.
The first time we were able to use the lights was at the 2006 AMRA Model Railway Exhibition at Box Hill. We were also able to use our black drapes so the layout looked quite good once the layout was set up, drapes on and the lights all plugged in.

Vic and I could not have completed the layout without the great help of Little John and Noel nor be able to set up, run and strip down at each show without Brendan, Ron, Greg, Big John and few of our other mates. Thanks guys. 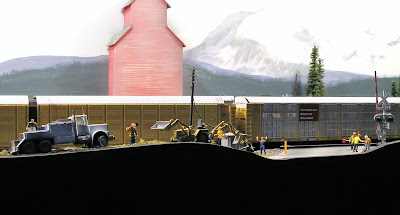 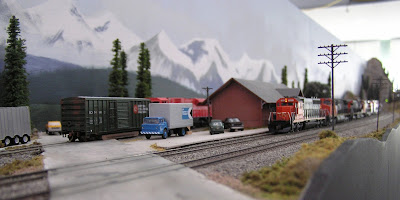 There are a few You Tube videos of the TRC taken by others so if you want to see some action head over there.
The TRC was a very enjoyable layout to share with a good many mates.

Thanks for stopping by.
Rod.
Posted by Rod Warren at 21:59 No comments:

Looking back
Last July I added some images of Thompson River Canyon a layout built by Vic and myself many years ago that now resides at Barry's house.
I thought I would show some construction images I took way back so the quality may not be that good however it might show some of the techniques we used and what it looked like on display.
So here goes.

To get the mountains to some shape we just hacked the foam with a small chisel and a Stanley knife following images we copied from a video of the area. 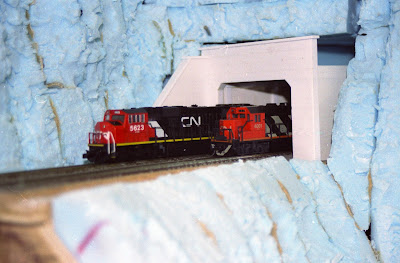 Seeing these images again has brought back some great memories. Next post I will try to find my  images of the layout on display showing the light boxes and signage.
That's it for today.
Rod.
Posted by Rod Warren at 17:46 No comments: