Now for a HOn3 Model RR

Filming of this and the next several videos were taken back in 2014 on Peter Sutton's beautiful HOn3 model RR.
The Los Pinos & Toltec RR is housed in its special room in Peters back yard. The room is fully lined along with vinyl flooring and air-conditioning. Most of the Locos and rolling stock are Blackstone with some brass locos lurking around. Peter creates his own rock molds by using large pieces of coal which are then in turn used to create his fantastic rock work.
Shinohara code 70 track and hand made turnouts is used throughout. Special control panels around the layout use LED's to show the positions of trains when in staging.
N.C.E. brand DCC is used to control the trains.
There will be several parts to add to my blog over coming weeks so sit back and admire Peters Los Pinos & Toltec RR.
A great deal more work has been done to scenery since these videos were taken and we will get to see that as this series continues.

So sit back and enjoy the Los Pinos & Toltec RR

Here is a teaser so click on the lower image pick for the video. 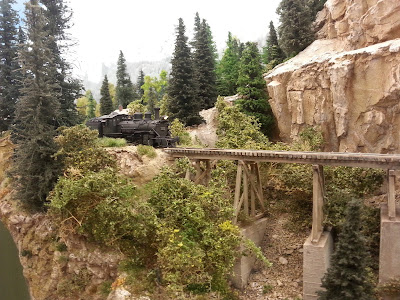 Trust you enjoy part 1 of this series and thanks for stopping by.

A Rather different Video

The Puffing Billy three foot Gauge Railroad is situated in the Dandenong Ranges approximately 50 kilometers East of Melbourne. The railroad was built to assist farmers and graziers who moved out of Melbourne in the 1980's move produce to and from markets in Melbourne.
Following a landslide way back in the 50's the RR which was then owned by the Victorian Railways was shut down due to a lack of funds and desire.
A determined group of volunteers set about to lobby the State Government and the railways and after many years were able to form a group of people willing to take the project on. Finally after many years the VR handed control over to this group and so this famous RR was once again underway. After many years of hard toil the Puffing Billy was re-opened to the public and has not looked back since.
Today Puffing Billy is one of the biggest tourist destinations in Victoria with hundreds flocking to have a ride on this world famous Narrow Gauge Railroad each and every day.
The model.
Alan Rockett's Puffing Billy layout just has to be seen to be believed. Those of us that have had the good fortune to do so come away in amazement the way Alan has truthfully captured the look and feel of this iconic RR.
All of Alan's locomotives, rolling stock, buildings along with the horse drawn coaches, horses and many many other items are all scratch built. His rendition of the iconic Australian Gum tree that grows in the hill around Belgrave and all through the Dandenongs are masterpieces.
So sit back and watch as I have tried to capture to excellence of Alan's work.


Thanks for stopping by.
Rod.

Modelers here in Victoria Australia suffered for years and years of not having any prototype N Scale locomotives, rolling stock or building with which to model.
Since the Victorian N Scale Collective was formed during the second Annual N Scale Convention held in Melbourne during March of 1991 there has been a ground swell of cottage industries starting to produce really nice kits from which to build locomotives, rolling stock and structures that fit that seen on Victoria railroads.
Lots of kit bashing and scratch building has taken place since then and you will see some of that in this video.
Also factory produced N Scale locomotives and rolling stock came onto the market over several years to fill this need.
It is quite a while since I did the video on Darren's Cann River Victoria N Scale railroad in fact it goes back to March 2014. We have been back a couple of times since, however the last time saw a lot more progress. Unfortunately I did not take my video camera with me on the last visit which is a pity as lots more has been completed and lots more undergoing huge changes.
So this video will be a prelude to what is to come.

Please sit back and enjoy the Cann River.

Thanks for stopping by.
Rod.
Posted by Rod Warren at 21:46 4 comments:

This video is an on train video

I took this video of Johns Santa Fe RR using my new small video camera a few years before the RR was dismantled.
I hope you enjoy a trip around the Boise City Sub.

Thanks again for stopping by.
Rod.
Posted by Rod Warren at 00:22 No comments: