On our way to Brendan's D&H

Saturday morning
9.45am and we were underway heading to Sunbury about an hour and a quarters drive from my home to visit the D&H RR which was having its last run before being torn down ready for a house move for Brendan and his family.
I had arranged with John the owner of the AT&SF Boise City sub to drop in on our way and so arrived at about 10.00am. (there where rumors that this RR is going as well so there are a lot of concerned operators in our group at the moment).
As we did not have too long to stay here are just a few pics.

Then it was time to depart and head to Sunbury about 45 klm away to meet up with the rest of the crew at Macca's as we were all heading to Brendans planning to arrive just after lunch.
A few quick pics of the RR then down to some operating.
This is a big layout and it will be sad to see it go after such a short time in existence 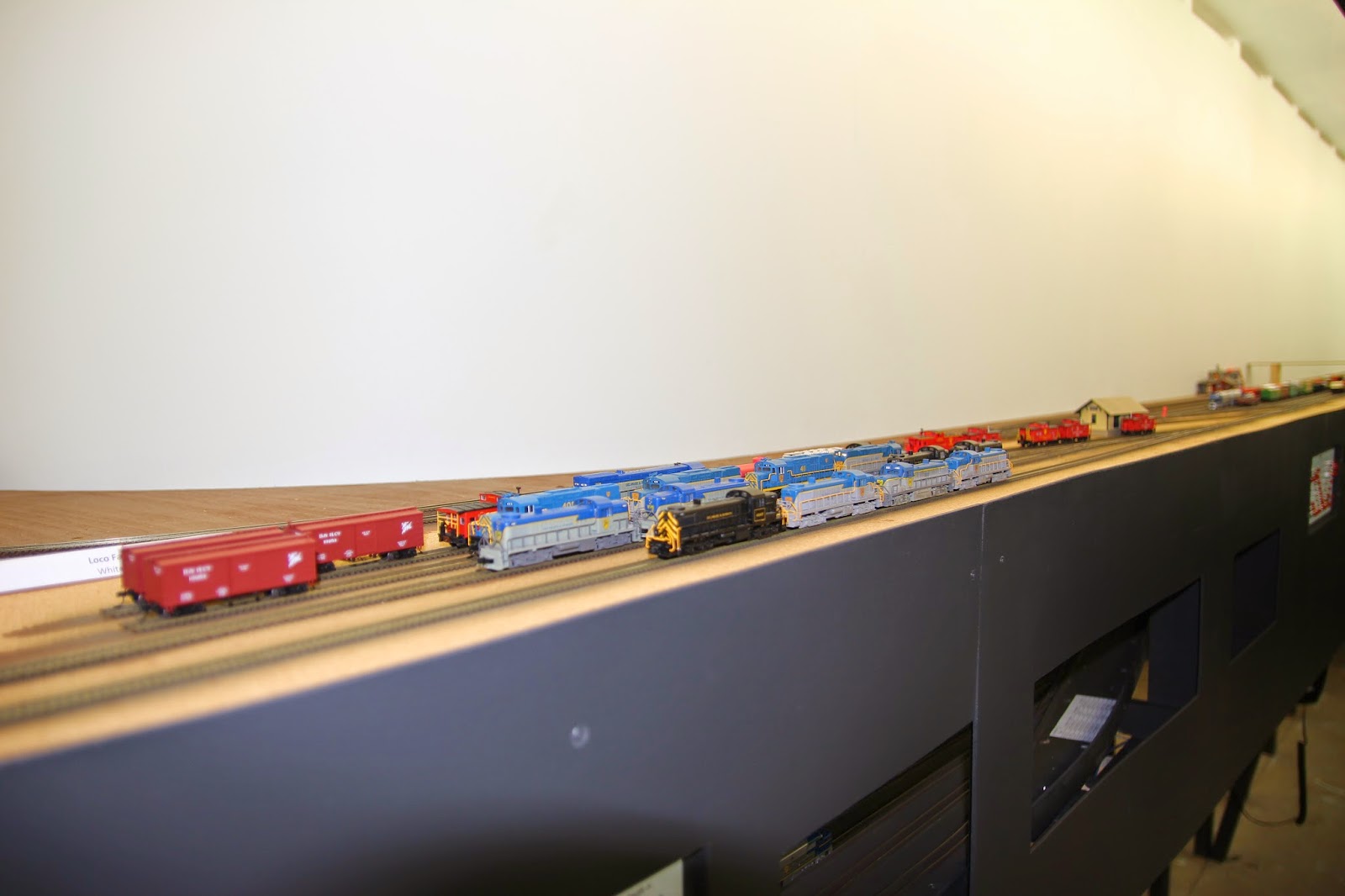 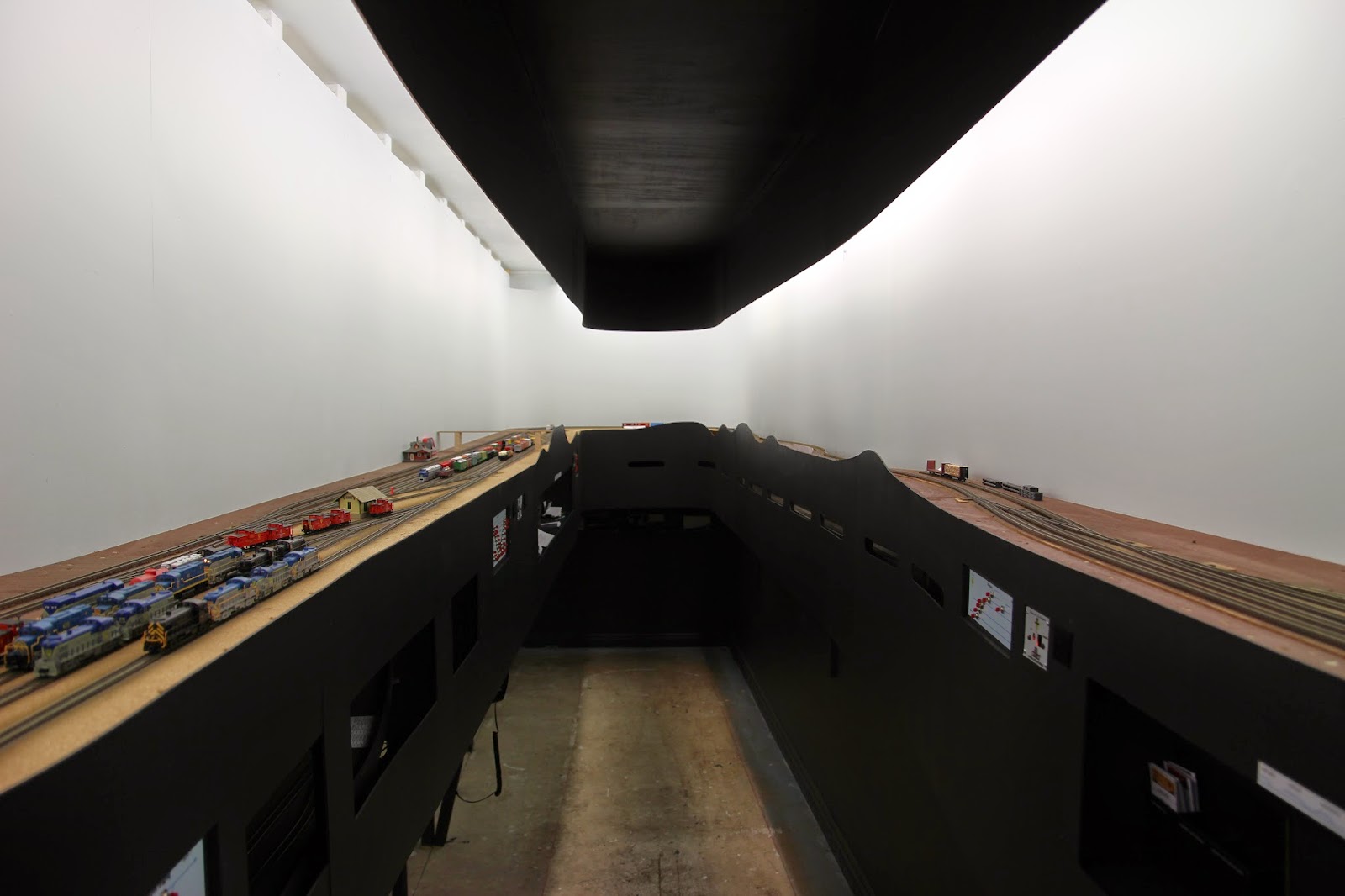 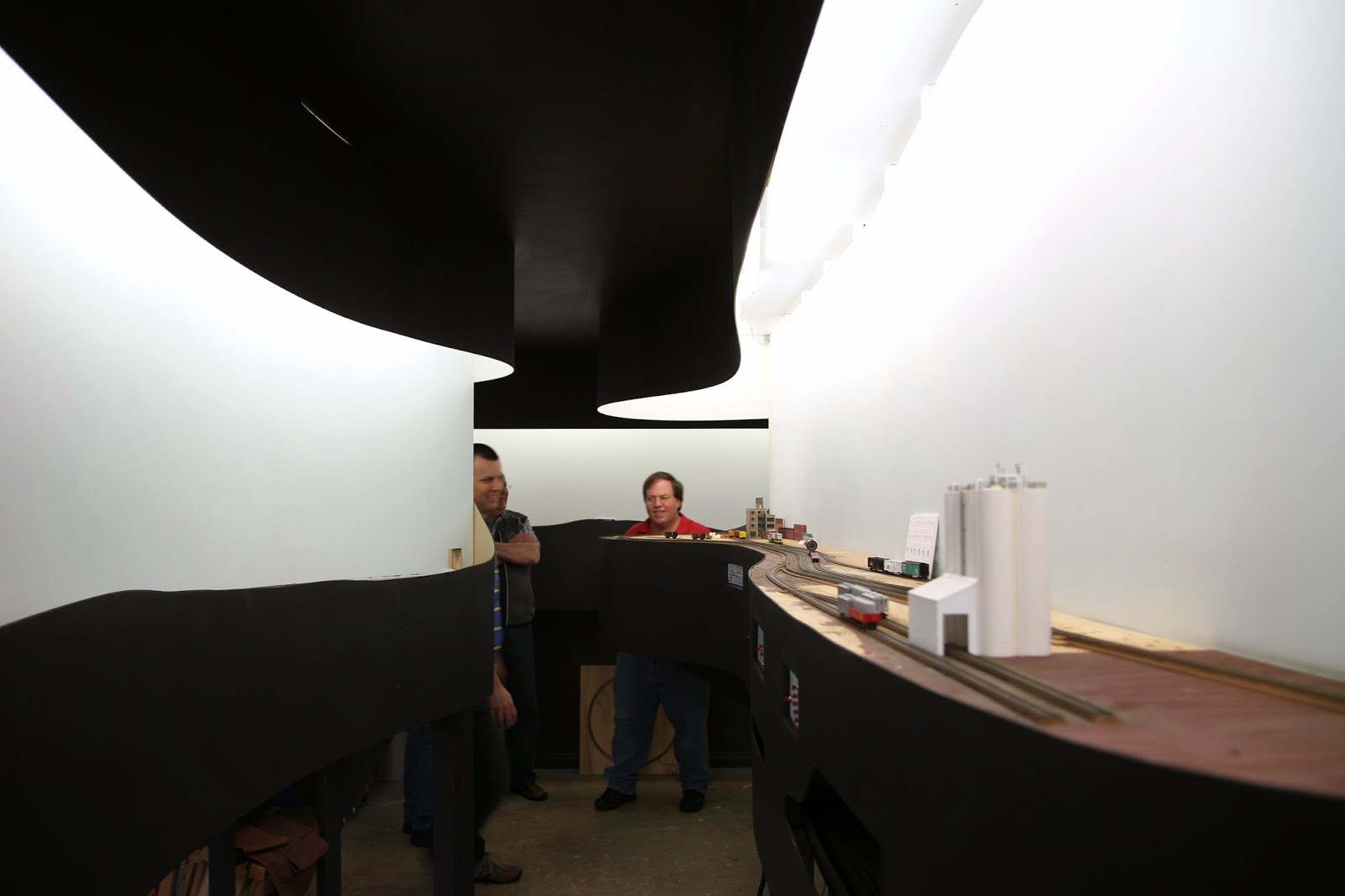 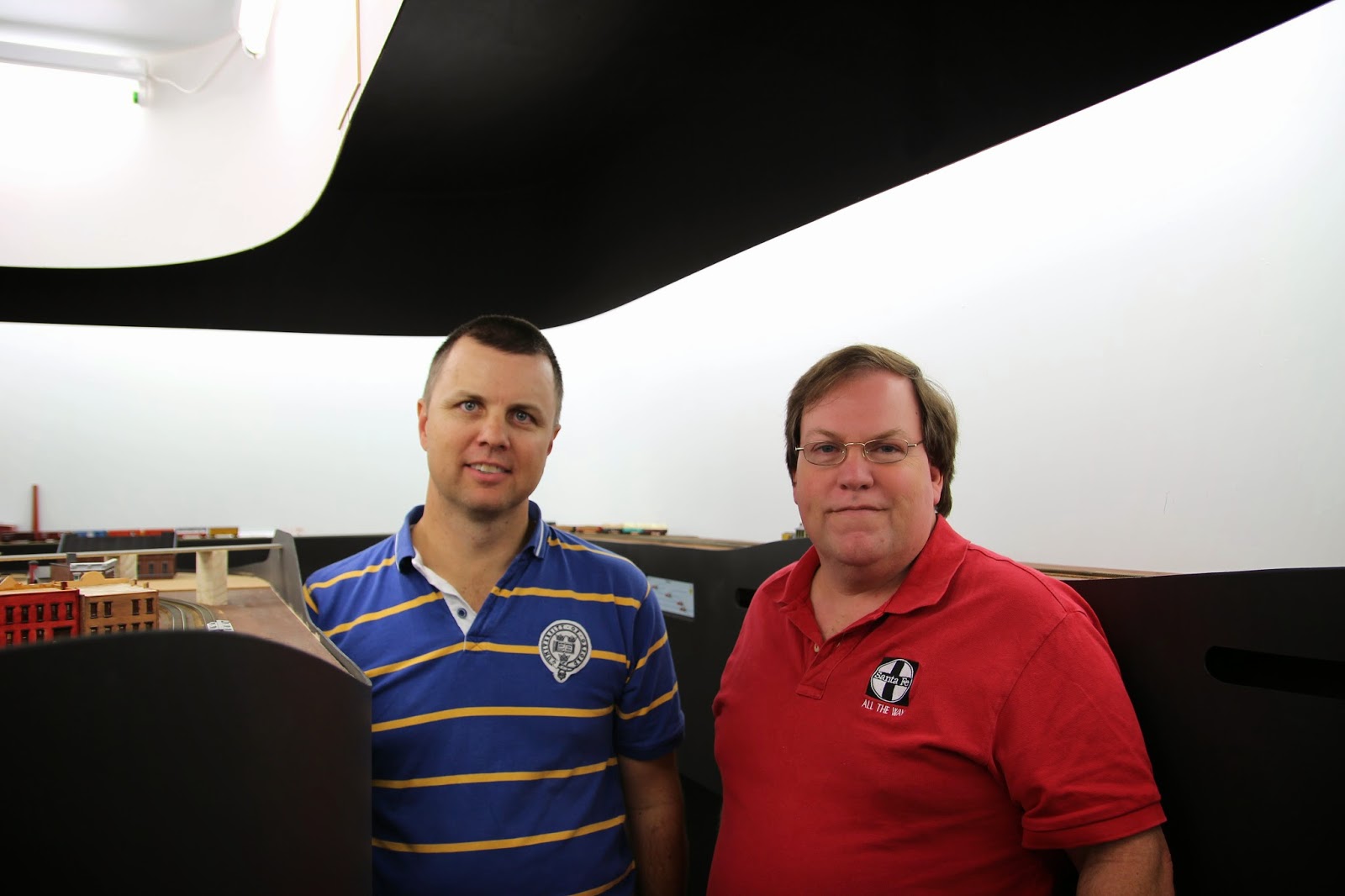 As we were taking a break in the arvo, the news broke that Chris a good mate and Brendan had hatched a plan so Chris could purchase the D&H and move it to his new train room. It will become a BN RR and the good news is that it will only be 2 kilometers away. Now we will have two in the same area how cool.
To make the announcement Brendan and Chris had set up two pass trains without any of us picking it up and here they are. 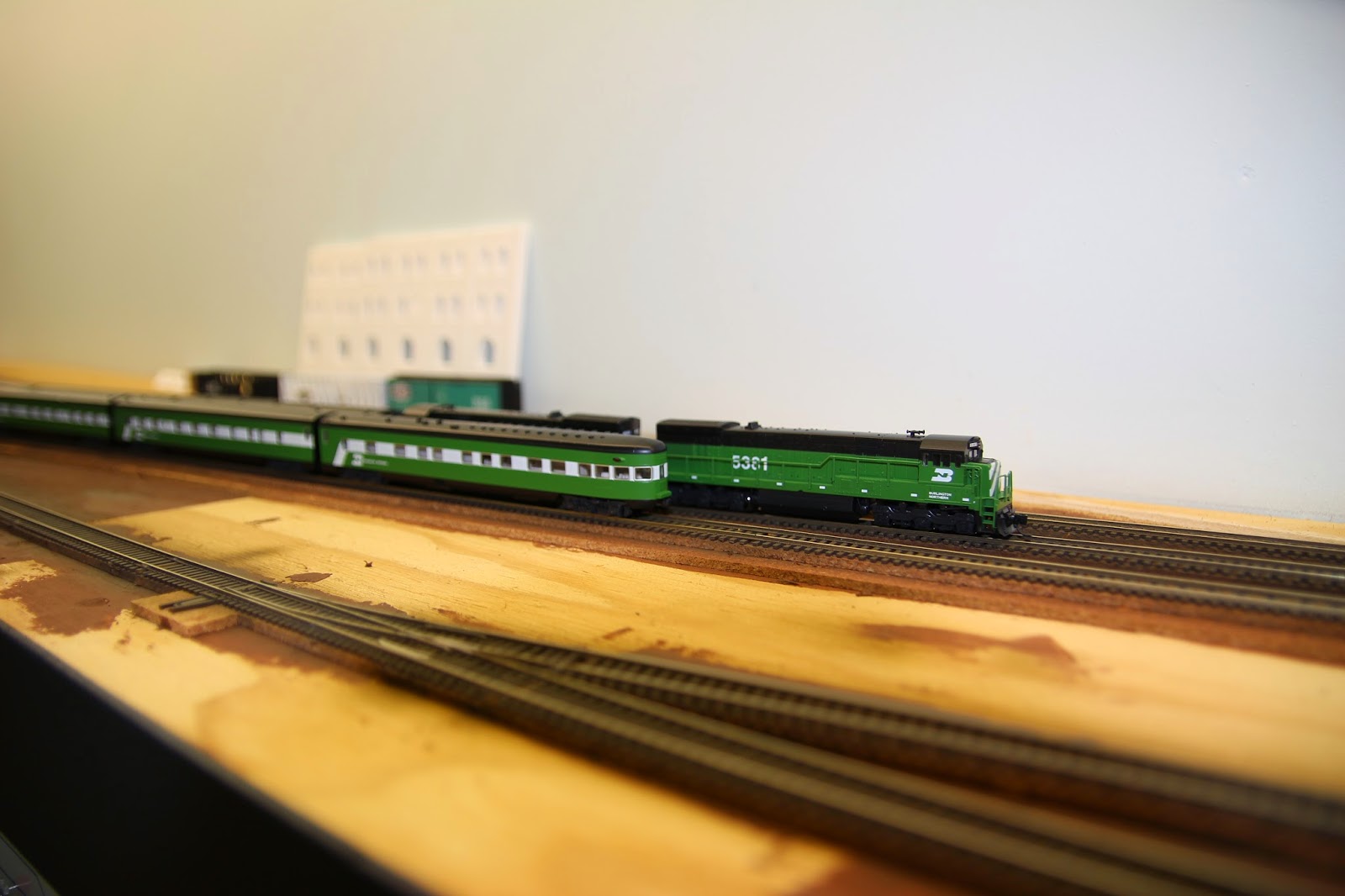 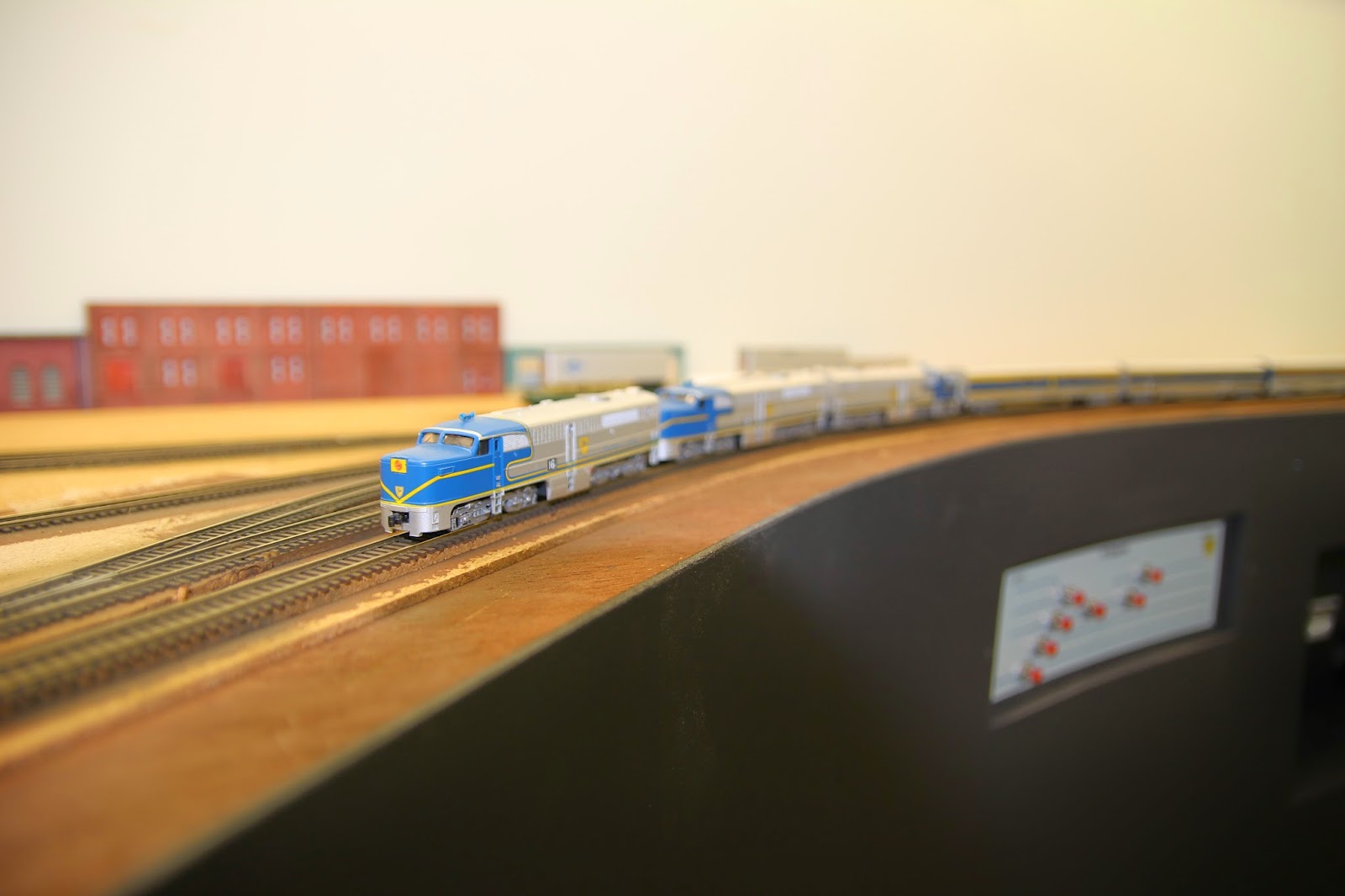 and a couple of very happy guys. 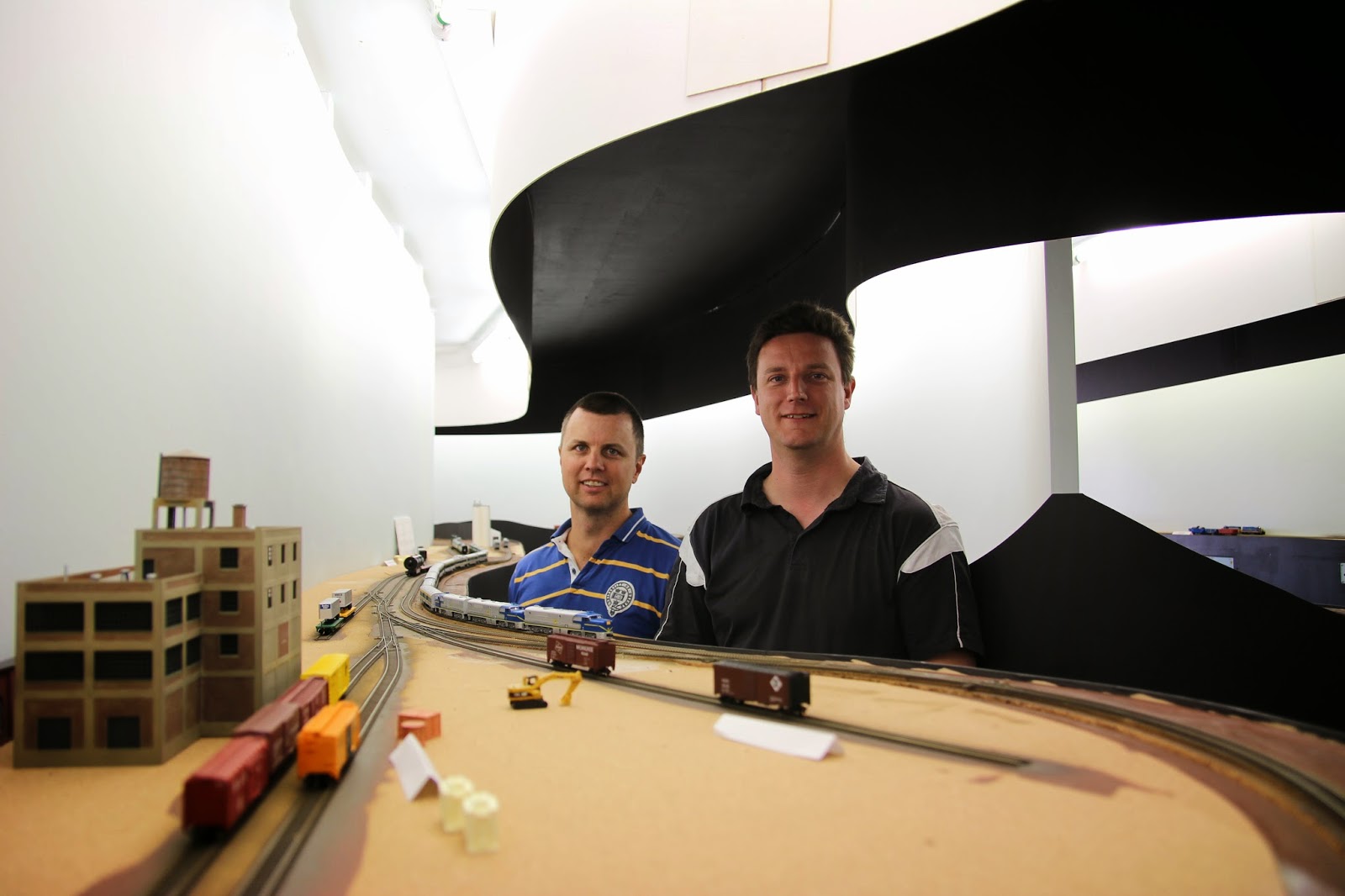 Brendan on the left with a smiling Chris on the right.
Great news lads.

Gordon and I left about 4.00pm headed home and then out to dinner with Gordon and my wife Helen. We got back here at about 7.00pm and then Gordon was able to download over 700 plus images of layouts and UP steam stuff off his laptop so I can share it with the guys.
Unfortunately I was not able to be around Sunday so John C was to be Gordon's chauffeur for the day and that was planned to be another long day.

Visitor from the USA

Following the N Scale Convention.
I was unable to attend the 14th National N Scale convention held in Brisbane the weekend following Easter which was a little disappointing as it is the first I have missed since they commenced in Sydney in 1989. I knew that a few modellers from North America where coming over to attend one being Gordon Bliss from Houston. Gordon and I have been emailing one another for a few months following pictures of our two layouts being placed in N Scale Railroading in the same month publication.
So I suggested that Gordon should see if he could get some extra time to come visit us in Melbourne during his time in Australia and get to see some more N Scale Layouts.
Well that didn't take too much persuading so after attending the convention meeting Mal and a few other modelers in Canberra Gordon arrived in Melbourne on Friday afternoon.
I switched with one of our regular Friday round robin guys so they could all come to the SFRSD during our normal get togethers. Morning tea, lunch, watch videos (train stuff of course) and then run trains on the RR pretty much in that order.
Gordon arrived at about 4.15pm and met the guys. A quick dinner of pizza and then Ron and Greg arrived to start a small ops session to get Gordon into the mood.
Here is just a few shots of the night on the SFRSD with a few of the guys and a foreign dignitary running some trains. That was day one.
On Saturday morning I picked Gordon up from his motel as we were headed to Brendan's D&H RR for its last run and so stopped in to see the Boise City sub of Johns on the way. More to come on the next post.
Thanks for stopping by.
Rod.

Grahams latest Mexican Locos
As you have probably gathered I enjoy weathering. Most of my Loco's and rolling stock are done so I enjoy being able to help out my mates if they'll let me.
Graham is a busy guy at the best of times and so he lets me grunge up his Locos for his RR. I've shown a few in the past so today here are the latest three to be sent to Mexico.
In the not too distant future I hope to be able to show some of these babies on the RR.

The first is an SD60 in KCS colours

One thing I have found is that Tamiya Nato Black is a very good substitute for weathered black. I used it on the trucks and fuel tanks on all three locos and it looks very good. When I was fading the locos I allowed the spray to just kiss the trucks after painting with the Nato Black and it made them stand out nicely. A touch of black wash around the journals and the job was done.
Now I have another three to paint KCS grey and give those a touch of weathering.
Until the next post thanks for stopping by.
Rod.